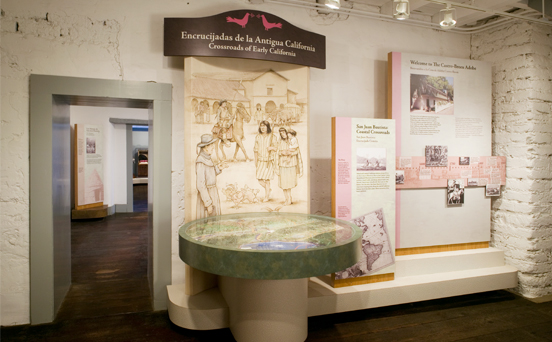 San Juan Bautista SHP, off Hwy 101 in the central coast, is a nationally recognized historic landmark. It was once a vital crossroad for travel between northern and southern California.

A House to Bridge Two Cultures (5:50 sec) overviews life in San Juan Bautista in the 1840s that centered on the mission and the plaza. Though isolated from Mexico and the United States, San Juan Bautista was increasingly connected to a growing trade at the intersection of the El Camino Real and Pacheco Pass that linked the coast with the Great Central Valley.

The adobe (now on the Historic Register) was the home of Modesta and Jose Antonio (the Prefect of San Juan Bautista, would later become Governor of Mexican California) Castro. He generously offered the penniless Margaret & Patrick Breen (of the Donner Party) family shelter in his adobe.

Soon after, the Breen's eldest son left home to seek his fortune in the newly discovered gold fields. John struck it rich and returned with enough gold to purchase the adobe and 400 acres of land. Two central California-region families, (one Mexican, the other Irish Catholic Immigrants) personal experiences parallels the cultural California changes (1839 - late 1800s) in a 6-minute video.